When you came across Elixir, one of the first things that you’ll hear about is the famous “Pattern Matching” and Elixir’s match operator, this is not a coincidence since many things in Elixir/Erlang are built around it.

When you learn your first programming language(in most cases), you learn to use the equal sign in another way, different from what you learned at your school when younger.

You learn that you use an equal sign to assign values to variables:

But the main difference behind Elixir equal sign is on the next example:

Did you realize something strange here? Let’s try the same in Ruby. 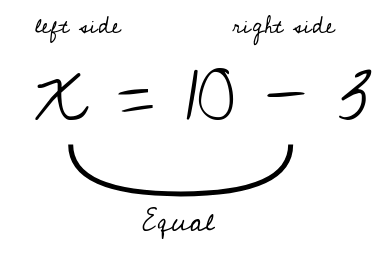 When we typed 2 = x for elixir is like as we typed 2 = 2, it’s true, so it evaluated 2. In ruby and most imperative languages, it tries to assign value 2 two Integer 2, so it fails. At the next line of our Elixir example, we tried to 3 = x and it raised MatchError telling that it can’t match 3 to 2, and that’s true.

Let’s summarize the algorithm at this point:

Elixir tries to check if both values are equal, if true, it’s a valid expression, if not, it raises a MatchError, but if we have a variable on the left side it will match everything biding the value of the right side on the left side.

Ok, at this time you may be thinking “Ok, it’s different from the most common equal sign in programming, but it can’t change my daily work”, keep calm and let’s study more complex uses of it.

We already learned the concept of matching, but when the “pattern” goes on? We can use patterns to make more complex matches between the left and right side of equal, let’s see some examples to get started.

Elixir always will try to equalize both sides, based on its patterns.

This process of treat equals sign as an assertion of equivalence and bind values of the right side into left side variables based on patterns is called pattern matching.

Elixir provides two useful operators to help us with pattern matching, one of these is the underscore operator, you can use it when you don’t want to assign a value during pattern matching, and it will ignore any value that is assigned and will help your code be more readable, every time that someone looks at these, will know that the code doesn’t care about what is assigned to underscore.

Lists have a problem that we don’t know previously its size, if we have a function that can return lists of differents size pattern matching will be hard, we don’t know how to match it on the left side. Fortunately, Elixir provides us an option to match against the head and tail of the list and it is the other operator that can help us with pattern matching.

Pattern matching is also useful to check the return of functions, but how it works? In Elixir is very common to functions return what we call “tagged tuples”, that’s nothing more than a tuple with the first item being an atom describing functions return status. The pattern is simple when the function was successful, its returns {:ok, response} and when an error occurred {:error, response}.

As our example, let’s analyze the responses of Poison, the most popular Elixir JSON library.

This convention, allow us to make pattern matching against function returns, we can match against :ok and :error tags.

At this example, we use pattern matching on case statement based on Poison.Parser.parse the response, when it returns a tuple with first atom :ok we bind the response (second element) to result in variable and prints it, and we do the same when it responds with:error tuple. 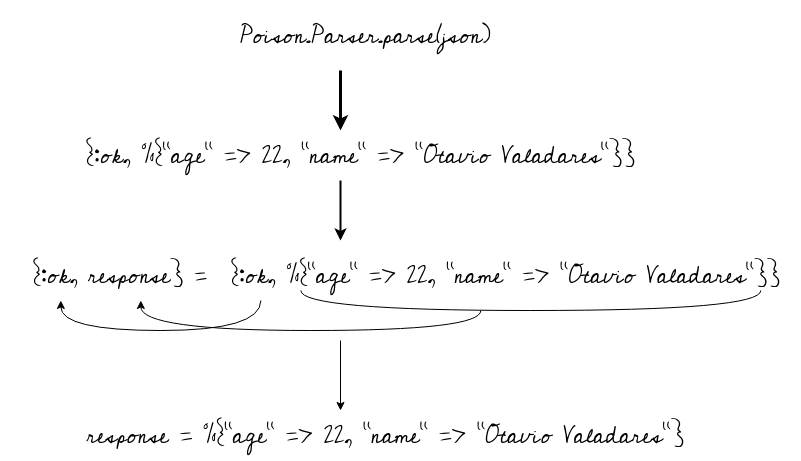 Most libraries in Elixir follow this pattern on responses, so get used to working with it. The previous example shows just one of several ways that we can handle it, and obviously, it’s not the best solution, but a good way to beginners get started.

We learned the basics of pattern matching and now it’s time to talk about the icing on the cake, Elixir’s pattern match can also control our software flow, choosing what function calls based on args and arity, this is the craziest thing that pattern matching can give to us.

If we declare two functions and send a message, we can choose the function that will be called.

As our example about it, we will use an example based on this video that I pretty recommend it.

Suppose that we have a module called Geometry that will calculate the area of different shapes, disregarding object oriented programming, what would you consider doing? I think the most common solution will create a function that receives an argument that is the shape to be calculated, and its numbers. This solution probably will need a lot of ifs or case statement to check what shape is and do the math.

With Elixir this problem has a different and cleaner way to be solved using what is called “Multi-clause Functions”, we can define multiple functions with the same name but each one with a different function clauses, Elixir will try each clause until it finds one that matches (using pattern matching).

Let’s begin with our example:

We defined our module Geometry and inside it defined two functions, we have both functions named area but one receiving a tuple with {:square, a} and other one expecting {:circle, r}. Let’s try to use our module:

Elixir will choose which function execute based on what was sent to function, it will try to pattern match against each one if it successfully matched, this function will be executed. 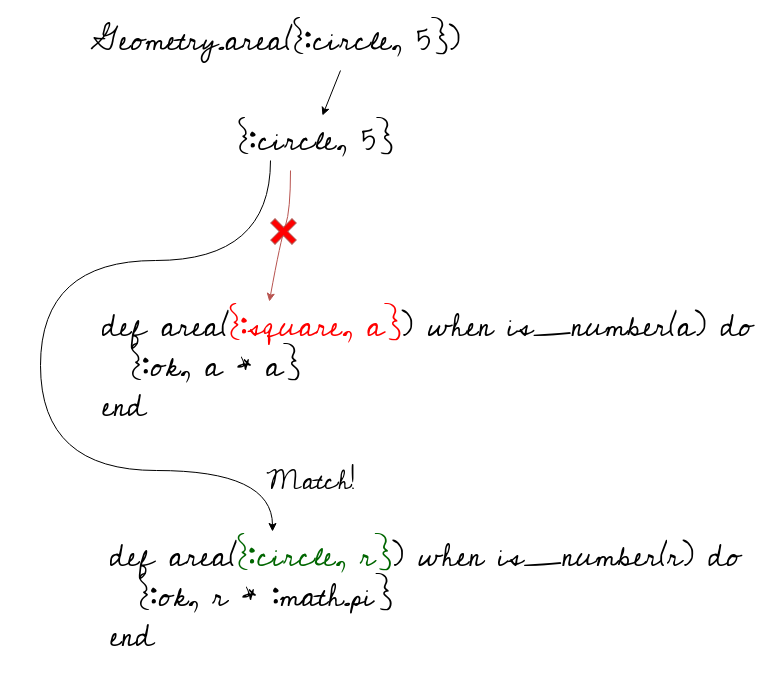 And of course, if we call passing a function clause that no one functions handle, it will raise a FunctionClauseError error:

To avoid this kind of error, we can define a function that handles everything to returns error when something unexpected was sent, but it’s important to note that function need to be placed at the end of the module because Elixir will execute the first function that matches against.

Multi-clause functions with pattern matching are another tool that elixir brings to us that can be used to control our software flow, it is powerful when understood can be easily used to solve a variety of problems.

If you have any question that I can help you, please ask! Send an email ([email protected]), pm me on my Twitter or comment on this post!